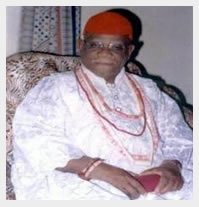 Ibusa is a federation of two autonomous settlements that have different origins – the Igbuzo settlement and the Ogboli settlement.

Prince Umejei the son of King Eze Isu, near Awka, killed his opponent during a wrestling match. This was an abomination and Prince Umejei was forced to go into exile instead of hanging. His sister Omoha accompanied him. Prince Umejei left, carrying on his head a pot of charms given to him by his father with the instruction to settle wherever the pot drops. After crossing the Niger the pot dropped at Ani Ohe.

According to Ogboli oral tradition, the mother of the founder of Ogboli settlement was Obodo, the daughter of Eze Nshi( Nri ),and the father was Ogbe Nnaga of Nshi .

At Nshi, Obodo had two sons,the first son(Okpala) was Odaigbo, his second son was Edini. Odaigbo slept with one of his father’s wives. This was an abomination (ALU ) and the penalty was death.Eze Nshi commuted the death penalty to exile. When Odaigbo got ready to go into exile, his mother, father and his brother Edini decided to go with him.

Eze Nshi gave Odaigbo and Edini two small pots of charms and ordered them to carry the pots on their heads and to settle on the spot where the pots dropped from their heads and touched the ground.After crossing the Niger and reaching the present Ani Udo Ogboli, the pot of Edini dropped. Edini settled there and, being the younger son,his parents decided to live with him.Odaigbo continued his sojourn until his pot dropped at Ani Ogwashi-Uku (Ogwa-Nshi-Uku).

The friendship between the children of Umejei and those of Ogboli deepened and Ogboli left its former site to live closer to Igbouzo.These two settlements are now regarded as one entity -Ibusa(pronounced Igbuzo)

The Ibusa people are Igbos living west of the Niger Basin, six miles west of Asaba in Delta State of Nigeria. The Traditional occupation is agriculture based on shifting cultivation. The main crops grown are yam and maize.

Ibusa agricultural economy.Traditional religion is still dominant. Although the Catholics, and the Church

Missionary Society have made remarkable marks on Ibusa.

The minimal patrilineage called the Umunna or Idumu are in the hands of the oldest man in the umunna called Diokpa-umunna and the council of elders.The council of elders is made up of the Ndi Eze,the Ndiichie or Nkpa Alo and grown up Mgba Nkpisi and the Omu of the unit if any.This governing body is refer to as the Diokpa-umunna-in-council.

The function of this council is to see that;all public affairs of the unit are properly conducted.The Diokpa of the unit holds the ofo of political and ritual authority and the decision of the council is carried out as that which is sanctioned by the Diokpa.

The government of Ibusa is structurally similar to that described above except that it is larger than that of the umunna or the Ogbe. The public affairs of Ibusa are in the hands of Diokpa-Ibusa.He is the oldest man in the town. By implication,the Diokpa of the town is always a Diokpa of one of the Ogbes. The Diokpa is not elected or selected. It is not hereditary either.The criteria for eligibility are:

All Diokpa Ibusa always undergo long periods of political apprenticeship as Diokpa of their umunna and Diokpa of their Ogbe during which time they are properly schooled in the customs and practices, and procedures of Ibusa system of government.

The Diokpa of Ibusa is the symbol of unity of all Ibusa; he is also the focus of political activities.He does not rule alone. He rules with a council which is a cabinet of elders made up of the ten Diokpa-Ogbe and their nine Oga (speakers); the three traditional war chiefs – the Odogwu, Uwolo, Iyase: the Ikwelle; and agreed number of members of Ndi-ichie and Ndi Eze from each Ogbe.The elders acting with the Diokpa Ibusa is referred to as Diokpa-Ibusa-in-council.

The Diokpa-Ibusa-in-council is the highest political authority in traditional Ibusa political system.The Diokpa sanctions the decisions of his council and that of IZU Ibusa with the Ofo.The decision is regarded as final and sacred until it is either revoked or re-stated by the Diokpa.

The IZU IBUSA consists of all the members of the Diokpa-Ibusa-in-council,all the Eze men is Ibusa,all the

Ndichie,all the Omu, the head of the various groupings mentioned above and any man of adult age that has taken the Nkpisi title.

In IZU IBUSA, the elders will start a debate and any one can stand up and talk. After all views are heard, the Diokpa-Ibusa through his Oga will order the Ndi Nze present to go aside and deliberate over the issues and bring back a decision. He may order all persons from a named age-grade upwards, to go out and deliberate. The nature of the matter will determine the body called upon to deliberate. This type of deliberation is called Ipu Ume.

The Oga in the name of the Diokpa announces the decision to the public. The decision becomes binding. If the deliberation is heavily booed,the Diokpa may decide to adjourn the IZU to another time or he may appoint a new group to go and make another deliberation in the light of popular opinion.

The eldest men are the holders of Ofo – the staff of authority and political power.They derive wisdom from

their age and long experience in the art of government and prestige from the fact that they have taken the Alo title, which is the minimal indication of success in Ibusa social, economic, ritual and political life.

Presently,Ibusa has ten villages and they are grouped into three ruling houses called:

The INE Festival is observed in mid – February to mark the clearing of farmlands. The Eshishie is peculiar to Ezukwu. Ibusa people have a common animal taboo.Ibusa do not eat Eyi.(Rabbit)

In Ibusa as a male child grows from childhood to manhood,he takes a series of hierarchically graded titles.The three most important titles are the Nkpisi, Alo,and Eze or Ozo or Nze or Obi.

Note:Eze title is also called Nze or Ozo or Obi or Ime Mmuo.

Some people call Ozo men redcap chiefs.Some refer to them by the greeting of Igwe.It is also important to note that only Ibusa men whose fathers are dead have the prerogative to take the ALO and EZE Titles.

The rigid order of taking is as follows: Nkpisi,Alo and Eze.

All persons who have taken the title of Nkpisi are members of a group that operate at the level of the minimal lineages but have social and political consequences at the Ogbe and town levels.

Only freeborn Ibusa men are allowed to take this title. It is the title at the bottom of the hierarchy of titles. It is a title that gives the individual the right to full Ibusa citizenship and the right to enjoy the democratic freedom available in the unwritten constitution of Ibusa. For example, the person can attend meetings and talk during deliberations. If an Ibusa man killed him, he was entitled to compensation. He has right to live in Ibusa except he has committed an abomination whose sanction is life ostracism. He can be Diokpa of his lineage or Ogbe or

Ibusa if he lives long enough to be the oldest man and if he satisfies the other constitutional conditions.

A man becomes a member of the Ndi-ichie group if he takes the Alo title mentioned above. Ndi-ichie deals with disciplinary matters related to all members of their group and those below their group. They also participate in decision-making process in Izu Ibusa, that is the traditional Ibusa political forum.

The Eze title is the highest and it involves the payment of a heavy sum of money and liberal feasting accorded to members of the Nze association.

Ndi Eze is a strong political decision-making group in Ibusa. In Ibusa political forum, they are called upon to decide major issues and they play a major role in deciding land cases. They constitute a major group in the leadership and authority structure of Ibusa.

Uwolo, and Iyase head these units. The groups are named according to their leader’s name, thus Omeze and Ezukwu are called Out Odogwu, Umu Odafe and Ogboli and Oge Ogwugwu and Idi-na-Isagba are called Out Uwolo Umuehea and Ogbe Owele and Umuekea and Umuezeagwu are called Out Iyase.  In term of seniority,Odogwu is the most senior, followed by uwolo.Iyase is the youngest.The war chiefs are autonomous in their units.They are responsible to the Diokpa-Ibusa-in-council,whose composition and function shall be explained later on.

The office of the war chiefs is not hereditary.It rotates within the component maximal lineages of the Ogbe

members and it is got through nomination and formal election of suitable candidates conducted in a traditional way.The elected leader undergoes an initiation ceremony conducted by the Ikwelle.

Any free Ibusa woman of substance could take the title of omu by the payment of a large sum of money and by giving a feast to members of Omu group. Omu are members of the women association called Otu Omu.

guiding the sanctity of the extended family life of Ibusa. They attend IZU Ibusa and constitute a major pressure group in Ibusa political system.

All traditional doctor-diviners are members of this powerful association called Ndi Dibia. Eze Dibia heads the group. The Dibia form an important organ in the decision-making process and in the crystallization of public opinion in Ibusa by manipulating the art of divination.In the past they helped to fix the dates, for military,ritual precautions ought to be taken. They also have the knowledge of healing herbs,and sorcery remedies.